The Long & Short of It: History Made as First Two Quarterfinals Set 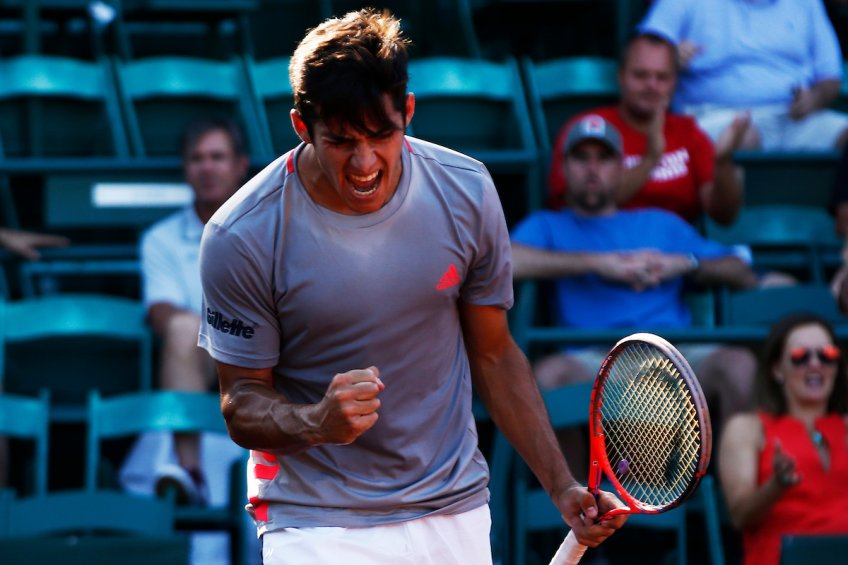 A former champion advanced in a hurry, while two rising stars took the long road to the quarterfinals during an afternoon of historic contrasts at River Oaks.

Chilean Christian Garin pulled off a major upset in the match of the tournament thus far, saving five match points to defeat No. 2 seed Jeremy Chardy 3-6, 7-6(4), 7-6(7). The dramatic second-round battle spanned three hours and five minutes, making it the fourth longest match in US Clay history.

Garin is now headed to his second clay quarterfinal of the season after making a run to the Sao Paulo final in March. He’ll face Swiss qualifier Henri Laaksonen next, who continued his demolition of the home team here in Houston by taking out his fourth straight American opponent: this time a 6-4, 7-5 win over Austin’s Ryan Harrison.

The 27-year-old served for the match at 5-4 in the second set and failed to convert on two match points before bouncing back for a straight sets win.

“I’m happy I could play a really good game to break him again at 5-5,” said Laaksonen, who is playing in the Houston main draw for the third time. “I’m really happy that I’ve been performing this well and fighting through. It’s maybe not always my best tennis, but I’ve been able to do the job.”

Spain’s Marcel Granollers also made history Wednesday – but a different kind than Garin. The 2008 US Clay champion wasted no time booking his spot in the quarterfinals, blazing past Australia’s Bernard Tomic 6-1, 6-2 in 47 minutes to record the shortest second-round match at this event. It was also the fourth fastest match ever on these courts – and Granollers’ smile on the Tennis Channel set said it all.

“I know he’s very dangerous but I think I played a very solid match,” Granollers told Brett Haber. “I just have to focus on my game. I was trying to play point by point and only focus on myself.”

Next up for Granollers is Norway’s Casper Ruud, another young player worth keeping a close eye on this season. In the final singles match of the day, the 20-year-old became the second fresh face to score a big Wednesday upset, ousting No. 4 seed Reilly Opelka 4-6, 6-4, 6-4 to reach his third tour-level quarterfinal of the year.

“It’s not easy with that huge serve that Reilly has,” Ruud said. “It’s not the typical clay court match. It’s tough to get a rhythm, but I knew that so I just tried to stay focused.”

Ruud, who broke into the top 100 for the first time this year, is also enjoying his time off the court here in Houston.

“This event and this place is great,” he said. “They have everything we could ask for. Yesterday, I went out and played 13 holes of golf. I have to do something to try to disconnect a little. This place, this club and these fans, they make it great.”