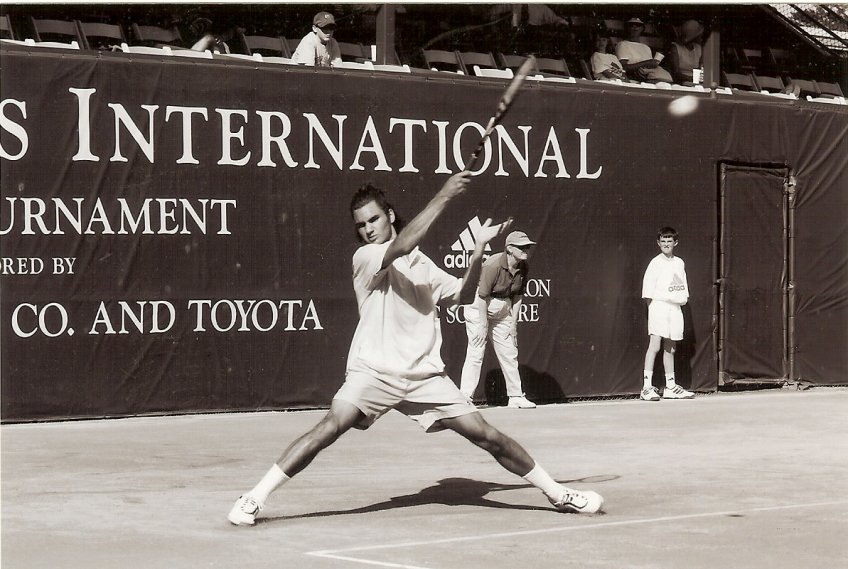 Following the second round of the 2000 tournament, the Houston Chronicle’s recap began with this statement:

“The River Oaks International always affords Houstonians a glimpse of some of the tennis stars of the future. Pete Sampras and Michael Chang played here as ballyhooed teen-agers. This year the names to remember might be Roger Federer and Mardy Fish, both 18.”

The youth movement remains a hallmark of this tournament, with its last staging seeing 22-year-old Cristian Garin defeat 20-year-old Casper Ruud in the 2019 final.

It is also true that both Federer and Fish were names to remember, though Federer and his extraordinary career are showing no signs of becoming a memory anytime soon.

Arguably the greatest player of all time, with 20 Grand Slam trophies, 103 tournament titles and more than 1,200 match wins, Federer continues to play at an elite level 20 years after his visit to River Oaks.

When he played the ROITT, the teenaged Federer was still more than one year from his seminal Wimbledon victory over Pete Sampras. Several years before he laid claim to the first of his Grand Slam titles, his River Oaks final was just the second of his burgeoning professional career.

Federer arrived in Houston in 2000 with a ranking of No. 53, giving him the fifth seed for the tournament. That afforded him a bye in the opening round, then he played four consecutive three-set matches, each against a previous ROITT champion.

His second round win was a roller coaster victory over two-time champion Magnus Gustafsson 6-3 1-6 6-3. After just that one match, Federer was getting plenty of attention in the locker room. The Chronicle quoted 31-year-old Jeff Tarango saying, "Federer is a fantastic player. I think he already has a better backhand than Sampras." Here’s how Federer assessed his 18-year-old game: "I had an incredible forehand when I was young and absolutely no backhand," he told the Chronicle. "But I've worked on my backhand, and my game is getting better and better. I can be fast and explosive, but I think my body will get stronger. I need to work on my service returns, because from the baseline I can hit with these guys."

Following a 6-4 4-6 6-4 win over two-time River Oaks champion Richey Reneberg, the Chronicle offered this analysis: “Federer, although blessed with a big serve and forehand, he shows savvy beyond his years the way he mixes the pace on his groundstrokes and serves from different angles.”

In the semifinals, Federer avenged one of the very rare blemishes on his career record. In more than 1,500 career matches, Federer has only been on the wrong side of a 6-0 set four times. Four! One of those came at the hands of Vince Spadea in 1999 at Monte Carlo, shortly after the American won his ROITT title.

On a sun-drenched championship Sunday at River Oaks, Federer faced 1994 champion Magnus Larsson. The Chronicle began their finals recap saying, “A new gunslinger came to town this week for the 66th River Oaks International, but a crafty old sheriff showed him what it takes to remain a top gun.”

Larsson claimed the first set 6-3, but Federer stormed back to level the match at one-set all with a 6-1 second set.

The 30-year-old Larsson fought off three break points in the sixth game of the decisive third set, then converted his own break in the 11th game to seal his second River Oaks title.

"I knew when I had the break points that they were actually match points, but he played them well," Federer said. "He played heavy on my backhand and then finished them with his forehand, so it didn't have much to do with me. I could have taken some risks, but I couldn't do much because he was playing well and he deserved to win.

"I'm happy for him, but obviously I'm disappointed.”