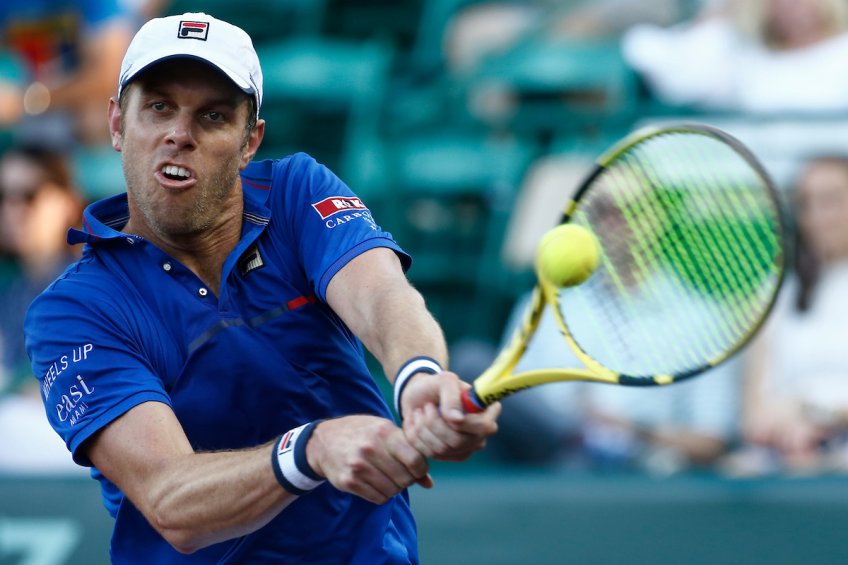 Querrey, also a doubles champion here in 2012 with James Blake, rose to No. 11 in the world last season. The 31-year-old Californian, playing here for the sixth straight year and the 11th time overall, notched 13 aces and 14 winners in the 6-3, 6-4 victory.

“I felt like I served well, and I played aggressive,” Querrey told Tennis Channel after the match. “I need to serve big and impose myself on guys [to win matches].”

Querrey will face Spaniard Guillermo Garcia-Lopez in the second round. He joins Bradley Klahn Wednesday for his doubles opener against brothers Ken and Neil Skupski.

Last year’s US Clay finalist Tennys Sandgren did not fare as well as his American countryman, making an early exit at the hands of 34-year-old veteran Janko Tipsarevic.

Tipsarevic is making his second major comeback from injury, returning in 2016 after being sidelined by a benign foot tumor, and again this year after sitting out much of 2017 and 2018 with hamstring issues. Seven surgeries later, the Serbian is back in Houston playing his third tour-level event since his making his return this year at the Australian Open.

Qualifying top seed Henri Laaksonen maintained his momentum in the main draw, opening the day with an upset of No. 6 seed Mackenzie McDonald.

“I tried to stay on my game to be aggressive,” he told Tennis Channel’s Brett Haber after the match. “My forehand worked well on important points. I put a lot of pressure on him. Especially on clay, when you can get the other guy on defense, it’s good.”

The 27-year-old Swiss was playing in just his second tour-level event of the season after qualifying and winning a round at the Australian Open earlier this year. Laaksonen will attempt to oust a fourth straight American this week when he faces Ryan Harrison in the second round.

Another qualifier, Colombia’s Santiago Giraldo, followed Laaksonen’s lead, upsetting American Bradley Klahn 6-4 6-4. A former top 30 player, Giraldo made a run to the semifinals here in 2014 and the quarterfinals in 2015, losing both times to the eventual champion.

At 31 years old, he’s working his way back after taking a six-month tennis hiatus leading into 2018 to rest his body and spend time at home.

“I like playing in Houston, and that’s one of the reasons I’m here,” Giraldo told Tennis Channel. I think I can play really good tennis here. And, of course, I like the people, too.”

Giraldo joins compatriot and fellow qualifier Daniel Elahi Galan, 22, in the second round after Elahi Galan became the third qualifier to advance on Tuesday with an upset of 37-year-old Paolo Lorenzi.