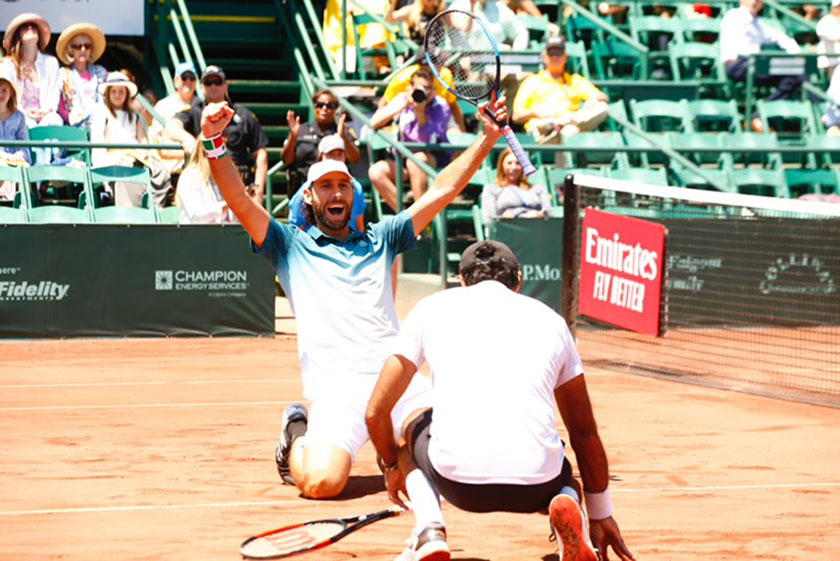 Veterans Santiago Gonzalez and Aisam Qureshi ousted British brothers Neal and Ken Skupski 3-6, 6-4, 10-6 to claim their first title as a team at the Fayez Sarofim & Co. US Men’s Clay Court Championship on Sunday.

Gonzalez, 36, and Qureshi, 39, dropped the first set before finding their rhythm in the second. It was their first meeting with the British brothers, and the fourth year in row the doubles title has been decided in a match tiebreak.

Gonzalez and Qureshi briefly teamed up in 2008, capturing a Challenger title in Brazil, but they wouldn’t pursue a long-term partnership until 2018.

“At the end of last year, we were both looking for partners,” Qureshi explained post-match. “We played in Rome, Madrid and Shenzhen, and played really solid matches against top teams. We thought something could click this year."

Earlier this season they reached the final at the New York Open, and just last week made a run to the Monterrey Challenger final. Sunday’s victory comes on the heels of their Saturday upset of the six-time US Clay champion Bryan Brothers. Bob and Mike Bryan have either won here or lost to the eventual champion every year they've played since 2005.

“I’m super thankful to [Gonzalez]," Qureshi added. "He stuck with me and believed in me, and it’s our third final this year. I’m super happy we were able to win it.”

It’s the 17th career title for Qureshi, who also reached the US Open doubles and mixed finals with Rohan Bopanna and Kveta Peshke, respectively.

“I think 39 is the new 29,” he said, laughing. “I feel young at heart, and that’s what it’s all about. Age is just a number. If you’re motivated and have those goals and dreams you want to achieve, it makes you keep going. That’s the only reason I’m still playing.”

Sunday marked the second US Clay final for Gonzalez, who also reached the championship match with Victor Estrella Burgos in 2016. The win caps off a special week for the father of two, who was awarded the Ernest Langston Sportsmanship trophy on Saturday.

The title is his 13th in a career that saw him break into the top 25 in 2013. He is also an 11-time finalist, including 2017 Roland Garros alongside Donald Young.